Making his directorial debut with the 1979 sexploitation comedy favorite “Gas Pump Girls,” Joel Bender has worked in Hollywood as a writer, director and editor for the past 40 years – during which time he also wrote the remarkable urban action-exploitation film “Tenement” (aka “Game of Survival.”) Mr. Bender was kind enough to chat with me about these cult classics and other highlights of his career.

The following interview was conducted in August 2014.

How did you decide to work in the movies?

I just fell in love with films when I was about 8 or 9 years old. My father had a candy store and there was a movie theater down the block, in the 50s. And I’d pick up a bag of candy and go to a movie, which was 25 cents. And I saw the great movies of the 50s in that theater, and it was usually empty. Rebel Without a Cause, A Face In The Crowd, Heaven Knows, Mr. Allison, pictures like that. A Face In The Crowd, I don’t how how I “got” that at 8 or 9 years old, but I did, I enjoyed it.

A Rabbinical student friend of mine named David Davies whom I met on a film, a Joe Zito picture about Patty Hearst (Abduction, 1975 – ed.) this guy was a partial money-raiser and he and I became partners. We went out and wrote Gas Pump Girls in a few days and brought it over to the original Cannon Films. They bought the script and suggested we go to California to make the picture. They allowed us to do that and we went into Raleigh Studios, which was a dilapidated place at that time. Raleigh is now a big studio with a lot of money – but that was 40 years ago. 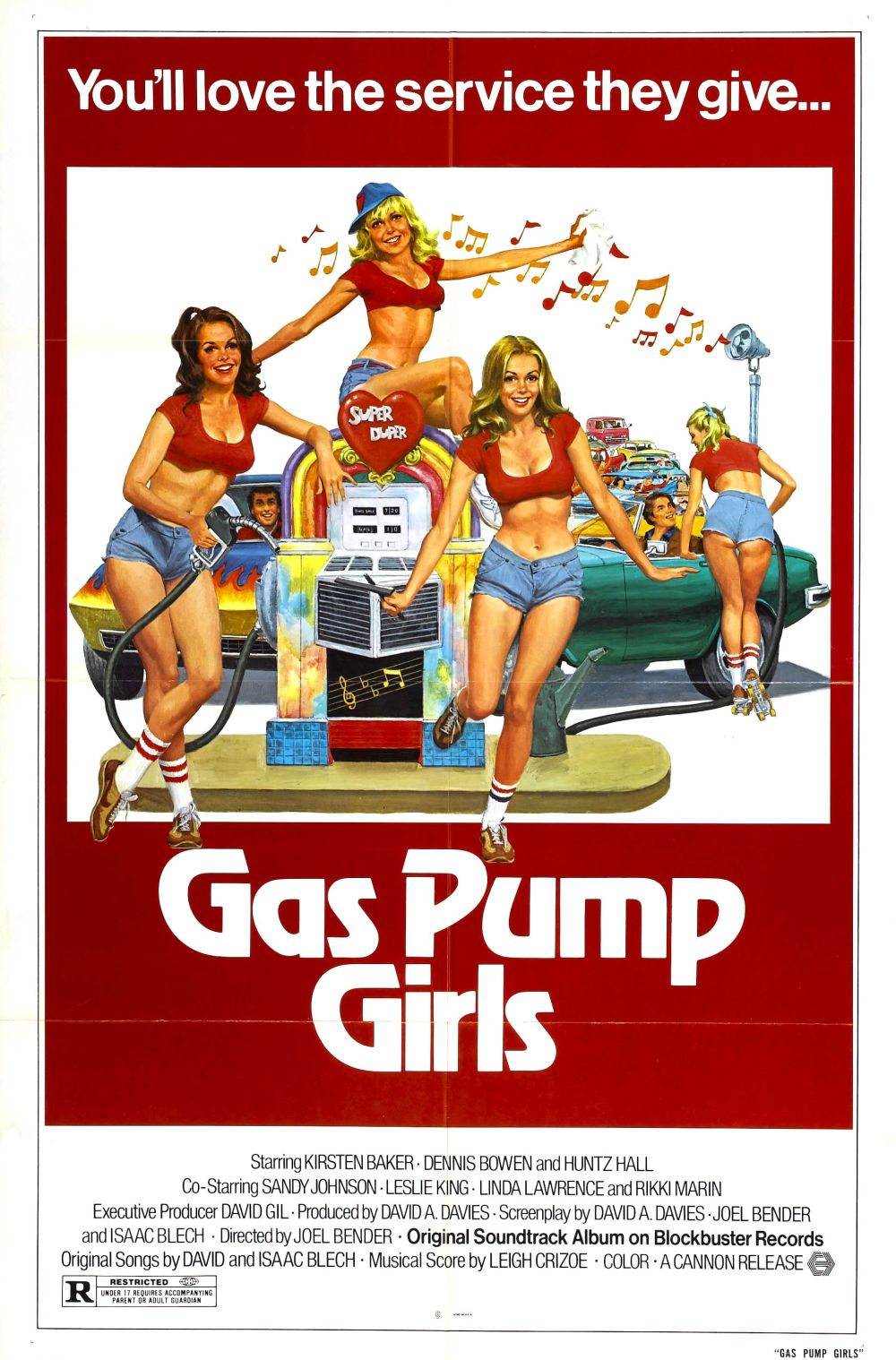 So we cast it, we had some great looking young ladies in it, and some famous old comedians.

We had Marvin Paige, and another guy, Michael Heit, who were very adept at casting. We interviewed a lot of people – Keenan Wynn, Red Buttons. But Keenan Wynn had just had a heart attack, and Red Buttons was an Academy Award winner, so he wouldn’t do it. (Laughs) Mike Mazurki was in the scenes with Joe E. Ross, and he was a great villain in most of the pictures he appeared in during the 40s. We almost got Bill Dana, too.

We got Cousin Brucie when we went back to New York during post-production, and we wrote the narration in at that point, to give the picture a little more energy, like during the opening credits. It was great to get him.

Music is a big part of the film, was there a soundtrack record?

There was, from a company called “Blockbuster Records.” I doubt if it has anything to do with Blockbuster Video. It didn’t ever really come out – it was done, but it didn’t really come out. The music was composed by a couple of other Orthodox Jewish friends of ours (laughs) and they wrote the songs.

By the way, I wasn’t really up on doing this kind of movie – so I made a demand from Dave when he started to raise the money, that I could shoot a musical number to put into the thing. Something I wanted to do, you know? (Laughs)

Was Kirsten Baker’s musical number, “All of My Friends” inspired by a love of old musicals?

It was kind of inspired by the song that Olivia Newton-John sings in front of her house in Grease.

Were the film’s gang, “The Vultures” also inspired by Grease?

Yeah, and The Wild One and all those pictures from the 50s. They were supposed to be like 50s motorcycle guys. That scene where they sing, “Your mother is a Ooh-ah”, was improvised, by the way. I fell on the floor when they did that. (Laughs)

How do you regard the film in hindsight?

How did the film Tenement come about?

I was originally hired to direct the picture. The script Rick Marx and I wrote had all the violence you see in the movie, but also some redeeming social features and more character development. It was intended to be just a tad higher up the food chain than what it turned out to be. I based it on an actual true story, something I read in the newspaper where a gang had tunneled through the side of a building to get revenge on the people inside. There was a picture of the tunnel, actually, it was very scary.

Did you feel that character development was lacking in the film that got made?

A lot of it does remain. It’s a little bit different. It had the power, anyway, because they characters are all atypical types. Roberta just bought the script, ultimately. Whatever you saw in the movie was all there in the script, but there was going to be more. But she did a good job. She paid me a lot of money, and then fell in love with it and wanted to do it.

A lot of that stuff was actually ripped off – I’d given the script to Cannon Films, and in Death Wish 3 you actually see some more of the characterization of the building tenants that we wanted in our picture.

Was the violence written into the film to make it more commercial?

No, Rick and I just thought that was what the film was about. If you’re going to make a film about that, you’ve got to show it all, you’ve got to take the audience by the throat. 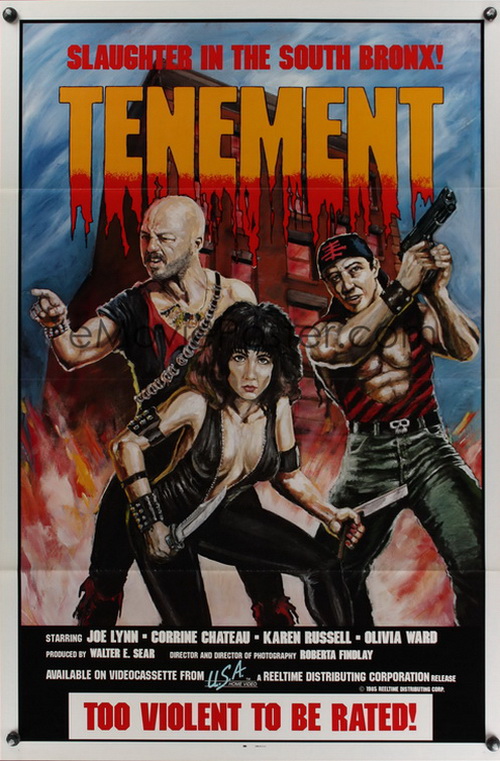 Did you grow up in the Bronx, where the film takes place?

I grew up in Brooklyn, a street kid basically, to some extent. The film was probably an expression of my anger, of some type. You don’t make pictures like that unless you’re carrying that.

What are some of your more recent projects?

The most seen, recently, was a picture I made called Karla (2006) about Karla Homolka and her husband Paul Bernardo – infamous serial killers that were up in Canada. It had a big Canadian release. The violence in it is not as explicit as Tenement but it’s felt even more by holding back and delivering it a different way because it deals with the torturing of some young girls – it’s a powerful movie. I had seen the story reported on one of those autopsy shows – I was attracted to it because it of the relationship between these two people, that were very much like Leopold and Loeb or the “Honeymoon Killers”, that kind of thing. I knew we could make the picture about the killers without actually showing a manhunt, because nobody knew about them until after the fact. It was about a twisted relationship between these two people. They didn’t want to have that picture made in Canada, there was controversy about it, although it got played in tons of festivals and did very well box office wise.

You also co-wrote and co-directed a documentary, The True Adventures of Raoul Walsh?

I got hired to work with Marilyn Ann Moss, who had written a book about Walsh, but had never done any filmmaking before, so we co-directed the film. It was the first documentary I’ve ever done, so it was a learning experience for me as well. Raoul Walsh started his career in 1913, when his mother died he tried to become an actor, and he was an actor for a while for D.W. Griffith. He actually played John Wilkes Booth in Birth of a Nation. Then Griffith gave him a couple pictures to direct and another company liked him, and he was off and running by 1914. And he was working at different studios, a lot of his time was spent at Warner Brothers where he made his best pictures. But he continued to work until 1965. Which is amazing, a fifty-year-plus career with two hundred films. He made a lot of pictures with Errol Flynn, they were very close. He felt all the changes of the industry, from the very beginning to the fall of the studio system.

Sincerest thank to Mr. Joel Bender for this interview!